For: The University of Rhode Island  | Momentum: Research & Innovation | Fall 2018

The need for such a contraption grew from Buxton’s frustration over how to uncover a 2,000-year-old harbor built by the Biblical King Herod the Great. A trained classical archaeologist who can read Latin and Greek texts, Buxton believed Josephus, a first century writer, did not make a mathematical mistake when he described Herod’s harbor as being 20 fathoms deep, but rather there was a mistake of translation from Roman to Greek measurements.

If her theory was correct, Buxton explains, then the lost foundations of Herod’s harbor were six fathoms below sea level, and many times bigger than previously suspected. But reaching the original foundations through almost 20 feet of sand posed an enormous task.

“At the end of the summer of 2017, I realized that if we were going to try to dig a trench that deep, we were going to be here 100 years,” she says. “I thought, if only we had jet skis … we could keep working in rough weather and launch off the beach.”

Buxton drew up what she envisioned, raised the funding needed from private donors, and turned to Licht for help. Licht, in turn, created a capstone course for his students, they produced a prototype, the “Digski.”

“The Digski is designed to be a rugged, low-cost replacement for a coastal archaeological research vessel: running sidescan, multibeam, and subbottom acoustic surveys, ferrying gear and scuba divers to and from underwater sites,” explains Buxton. “It serves as a surface hub for DGPS localization, diver tracking, and communications. Its primary excavation function is to power an underwater dredge system directly from the jetski engine, eliminating the need for a large boat to carry a conventional high-pressure pump.”

Especially useful in a place with a dynamic surf zone and few natural harbors, the Digski can be launched manually from just about anywhere, and handle much rougher sea conditions than a dive boat.

In May, the prototype went to work in King Herod’s harbor and Buxton presented the results of the excavation at an international conference in October 2018.

“One of the biggest obstacles to marine research is the cost and logistics of operating a research vessel,” Buxton observes. “By adapting the Digski as a viable low-cost replacement for coastal survey and excavation, and making everything open-source, we are helping to democratize ocean science.

“Michael Katz got it immediately, and I am so grateful to Professor Licht and his very talented capstone class.” 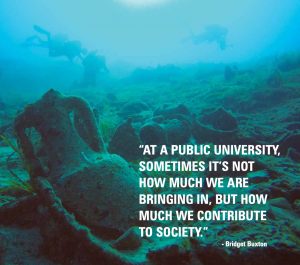 Buxton hopes to raise further private funding to develop the Digski prototypes and use them for marine archaeology in both Rhode Island and Israel, but emphasizes that profit is not the motive: “At a public university, sometimes it’s not how much we are bringing in, but how much we contribute to society.”

Katz says both URI and its nonprofit research foundation, URI Ventures, are enormously proud of the discoveries and ventures launched by faculty and students who imagine big ideas and partner with companies to bring them to market.

“A key mission of URI is to translate discoveries from laboratories, workshops, studios, stages, libraries, research vessels, and offices into the services, products, and policies that benefit our society and the world.” 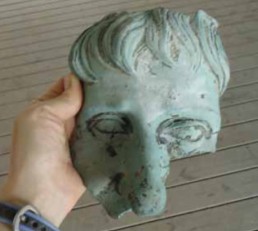